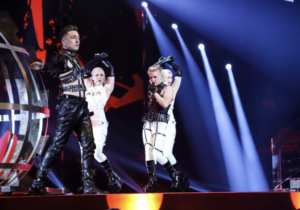 Pardon me for saying so, but the Icelandic group Hatari performing at Eurovision 2019 is blowing smoke up our asses when they say they’re for BDS, describe Israel as apartheid, & challenge genocidaire Netanyahu to a trouser-wrestling contest. They deny they’ll make any political statements supporting Palestinians during the performance but it wouldn’t matter if they did. When Hatari defied the Palestinian call for a cultural boycott of Israel & crossed that picket line, they took a stand with Israeli apartheid & genocide against Palestinians. When they reduce political opposition to genocide to a trouser-wrestling contest with Netanyahu, they don’t just mock & belittle the scale of oppression faced by Palestinians but flip the bird to justice. In politics, you can’t play both sides of the street. You cross the cultural boycott picket line, you become the soundtrack to genocide. There’s no two ways about it.