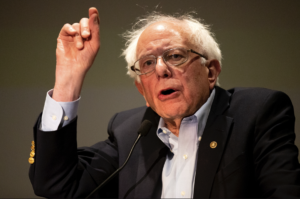 The American left, in its moribund state, is now debating whether Bernie Sanders or Elizabeth Warren is the ‘lesser of two evils’ presidential candidates. It’s a problem in politics when progressive forces cannot distinguish electoral demagoguery from genuine commitment to justice. But it’s a greater problem when they consider demagoguery about social benefits for Americans more compelling than abhorrence at candidates who do not denounce but support the US bankrolling of colonialism, apartheid, & genocide against Palestinians.

Lesser evil is a very treacherous politics which led some who identify as socialists to call for a vote in the 2016 elections for Clinton who pledged quite shamelessly & frankly to accelerate genocide against Palestinians. Of course, just two years before, while campaigning for president, Sanders refused to denounce Israel for its 2014 seven-week murderous bombing campaign over Gaza. In that refusal he did not distinguish himself from Clinton on genocide against Palestinians. For that matter, neither distinguished themselves from Trump.

Sanders recently declared at a CNN town hall that “I am 100% pro-Israel.” Is that why he wouldn’t denounce the genocidal bombing campaign over Gaza that went on for almost two months? Sanders is a guy who likes to play both sides of the street in order to improve his chances for election as president. To pander to the growing number of Palestinian supporters he said “Israel is run by a racist government.” This has been called a ‘courageous’ stand. How courageous is it when millions of people in the US & around the world, including committed Zionists like Natalie Portman, acknowledge the same thing? In response to a question, Sanders said “The United States needs to have an even-handed approach” & “cannot simply be pro-Israel & ignore the suffering of the Palestinian people.” Does he mean like he ignored their suffering whilst they were being bombed to smithereens? Perhaps we should ask him to explain how one can be even-handed in a genocide.

Sanders is not a supporter of BDS. Of course not. Because that would undermine his 100% support for Israel. As president, he would continue US policy in support of Israel because ultimately US capitalist interests in the Middle East, not the president of the US, determine that policy. At this point in time, when Zionists have inextricably linked the legality of BDS to the US Bill of Rights, taking a stance of 100% support for Israel & opposition to BDS puts Sanders at odds with several fundamental rights protected by the Bill of Rights. How Sanders supporters can reconcile themselves with that remains a mystery of political cognition. The determination for supporting Sanders is not his populist rhetoric but whether he is able to take a committed, uncompromising, fearless stand against the genocide of Palestinians & help build the movement to support them against Israel & the US.

(Photo of Sanders from Time Magazine)