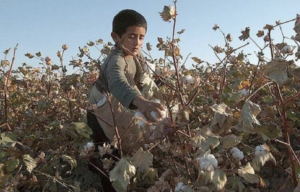 Reposting this from 2012 about how the Obama administration made it legally impossible for the Department of Labor to ever re-raise the issue of child protective laws for children farmworkers in the US, most of whom are Latino. In many ways it can be said that Obama policies concerning immigrants & refugees set the stage for the Trump administration’s massive assaults on immigrant & refugee rights. At the same time as Obama was forcing little kids to work in dangerous situations without protections, he was also arresting & deporting more undocumented immigrants than any previous administration.

In a move breathtaking in its malignancy, the Obama administration just withdrew a proposal to the Department of Labor (DOL) to update safety laws for child farm workers. Contrary to popular misconception, child labor is not entirely illegal in the US. Outside of agriculture, children must be at least 16-years-old to work (14 & 15-year-olds can work as cashiers, grocery baggers, car washers). Children of any age are allowed to work on family farms without restrictions but in agribusiness, with an estimated 800,000 child workers, there are regulations for children under 16-years-old, though they are not monitored or enforced. In formulating the updates, extensive research was done on safety & health hazards for children on industrial farms. They are exposed to pesticides (often sprayed directly by planes as they work), snake & insect bites, razor-sharp tools & lack of safety equipment, dangerous farm machinery (without safety devices like seat belts or roll-over bars), extreme heat, chemicals & explosives, work at extreme heights in silos & grain storage facilities, work in manure pits (with E. coli contamination). Exploitation of child labor is rampant: age restrictions are ignored (as can be seen in this photo of a US cotton worker); children often work 10 or more hours a day, 5 to 7 days a week, & at the peak of harvest, daylight to dusk; they are paid less than the minimum wage; they are not provided with drinking water & toilets. As a result accidents are frequent, maiming common, deaths gruesome. Farmworker children have high incidences of pesticide-related respiratory & digestive diseases, headaches, burning eyes, as well as brain damage, & death. Long-term pesticide exposure in adults is associated with cancer, neurologic problems, & reproductive problems.

The racism of this decision by the Obama administration cannot be denied since 85% of crop workers in the US are Latino. Are these children of no value? The Labor Department said farmers & ranchers complained that the new regulations would negatively impact family-owned farms but since these farms were always specifically exempted from regulation we can be certain it was agribusiness interests who opposed safety protection for small children, which were anyway unlikely to be enforced. This cynicism at the expense of little kids says so much about the Obama administration. Ending the abomination of child labor has to be one of our most important commitments.

(Photo is child farmworker in US)