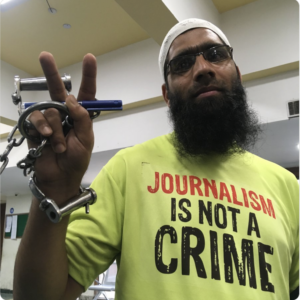 No one can be faulted for lacking enthusiasm about defending Assange against US prosecution. The guy’s a creep with stinking rotten politics who still faces prosecution for two outstanding rape charges in Sweden. But he’s not being hunted down for being a dirtball. He’s going to be prosecuted because Wikileaks exposed US war crimes in Iraq.

Loath is anyone except his Assadist & fascist supporters to build a defense case around him when high-principled journalists like Kashmir’s Aasif Sultan are sitting in jail for months with no international defense at all & Palestinian journalists are being executed by Israeli snipers at the Great Return March without any international outpouring of solidarity. The Committee to Protect Journalists (CPJ) reported last month that there are 251 journalists, including 33 women, in jails around the world–most of them subject to beatings, torture, invasive body searches, & sexual violence. Among the worst, but certainly not the only, offenders are Syria, Mexico, Russia, Colombia, Brazil, Nigeria, South Sudan, Somalia, Iraq, Afghanistan, Pakistan, Turkey, India, Bangladesh, Burma, Philippines, Vietnam.

What the Assange case highlights is the almost complete lack of support that imprisoned & disappeared journalists get. Rather than turn Assange into some kind of hero that he isn’t or turn our backs on defending him because he is so personally repulsive, we should use his case not to apotheosize Assange but to defend freedom of the press & to educate about the importance of defending all journalists from arrest, disappearance, & murder by tyrannical & repressive regimes.