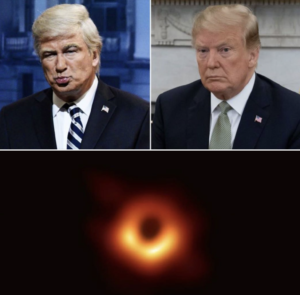 Last month, Trump tweeted a threat to have Saturday Night Live on NBC investigated by the Federal Election Commission or the Federal Communications Commission for the ongoing Alec Baldwin sketches mocking him. Carol Sughrue has just mocked Trump’s brain as a black hole & we want to assure her that we will defend her, or join her in rolling on the floor laughing, when Trump starts threatening legal action against her.

(Photo on top is Alec Baldwin & Trump; photo on bottom is Trump’s brain)