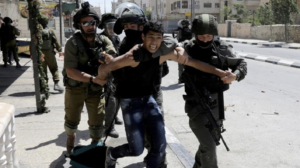 Palestinian Prisoners’ Association reports that at least 6,000 Palestinian children have been arrested by Israeli soldiers since 2015. Some were arrested & imprisoned after being shot & wounded. Almost all have been subjected to psychological &/or physical abuse while in custody.

The total number of Palestinians currently imprisoned by Israel is 5,700, including 48 women & 250 children.