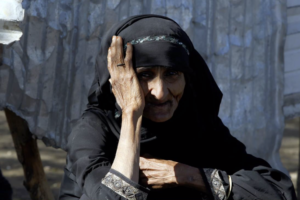 Repost from March 20 2017: This month marks the fourth year of Saudi-coalition carpet bombing of Yemen with support from the US & UK. It is the site of one of the glorious Arab Spring uprisings that saw women playing a leading role. We should pay tribute to their revolution & commit ourselves to rebuilding a principled antiwar movement because the current one has been corrupted by swallowing the rhetoric of the so-called ‘war on terror’ & has left the Yemenis to stand alone against the onslaught of bombers.

It’s been two years this month since the Saudi coalition of five monarchies & two military dictatorships began bombing democracy into Yemen, where in 2011 one of the most powerful Arab uprisings brought dictatorship to its knees–at least for a period.

It was a hopeful period for humanity, with uprisings in Egypt, Bahrain, Syria, reverberations in Iraq, Morocco, Tunisia, & elsewhere. The setback of the Arab Spring by the most repressive military forces & think tanks aligned against them has brought the cynics, but mostly the Muslim-haters, out of the woodwork to sneer that Arabs would be capable of democracy, especially in those countries where women wear the veil. Yemen & Bahrain were led by fully-veiled women standing against tear gas & tanks & they played a central role in Egypt. But smart-asses whose most courageous acts are cursing at authorities under their breath dare to disdain them?

The tragedy of the Arab Spring is the epic failure of international solidarity–& now the alignment of erstwhile progressives with Assad’s dictatorship & Russian bombing of civilians in Syria. It is not Arab activists who do not understand the character of democracy. It is mostly western progressives moving to the right led by Assad propagandists, retired CIA & FBI agents, & former US military officers who do not agree with uprisings against dictatorship or international solidarity–so profound is their hatred of Muslims & Jews.

The Arab uprisings have not said their struggles are over nor conceded defeat. This is not the time for triumphal or smug obituaries. Until then, we stand with them & look to them as leaders & teachers in the struggle of humanity for a world suitable for human beings to live & love in–a place to come of age & grow to old age in peace.

This women in Sana’a, Yemen is outside her tent shelter at a camp for those made homeless by Saudi-led, US & UK backed bombing.

US out of Yemen.