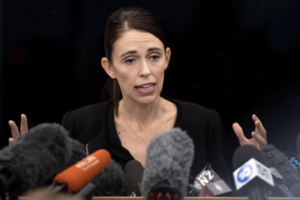 Well that didn’t take long: today, New Zealand prime minister Jacinda Ardern called for a “global response to the dangers of social media.” By which of course she means increased censorship at a time when social media is on a rampage of deleting & suspending the accounts of Palestinian & Kashmiri activists & their supporters. Social media is not the primary culprit in hate mongering against Muslims. Corporate media is a bastion of the stuff. So why didn’t she call for them to tone down the lies & hate mongering? Why didn’t she call on them to stop propagandizing for the so-called ‘war on terror’? Why cut off the resource where most of us get news directly from Palestinians & Kashmiris & can organize against attacks & threats to Muslims? Why doesn’t she talk to New Zealand’s war minister to get troops withdrawn from Afghanistan, Iraq, & elsewhere? Why doesn’t she denounce New Zealand’s participation in the ‘war on terror’? Why is she going after free speech on social media rather than the US Pentagon? The honeymoon might be over for Jacinda Ardern.

(Photo of Ardern from AFP)