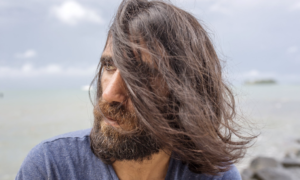 A dear Facebook friend sent me a copy of “A Letter From Manus Island” by Behrouz Boochani, the Kurdish Iranian writer denied asylum & locked up by the Australian government on Manus Island in Papua, New Guinea for almost six years. He is the recent winner of the Australian Victorian literary award for his book “No Friend But the Mountains” which was written one text message at a time.He was unable to be present to receive the award because he is not allowed into Australia & remains incarcerated for being a refugee.

Boochani calls it a “resistance manifesto.” It’s only ten pages long but it is a powerful, magnificent assertion of the humanity of immigrants & refugees. This is just one excerpt: “The refugees have been able to refashion the image of themselves as the “Other.” We have reshaped the understanding of us as politically inept & have been successful in projecting an image of who we are. We now present the real face of refugees for Australia to discern.” After Christchurch & after the hateful manifesto by the white supremacist politician, Boochani’s letter is a breath of fresh air which affirms the humanity of refugees & appeals to the humanity of all of us to fight with them for asylum rights as human rights. Anyone who has read his resistance manifesto for refugees awaits with anticipation getting our hands on “No Friend But the Mountains.”

(Photo of Behrouz Boochani by Jonas Gratzer for the Guardian)