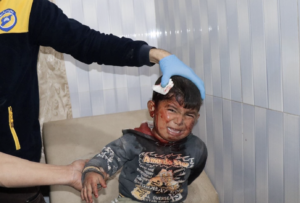 Intensified Syrian & Russian bombing of Idlib killed more than 150 people this week, including 53 children. Thousands of civilians were forced to flee their homes as Syrian & Russian bombers pummeled dozens of sites. There is not yet a report on the numbers of those injured. Nor have Assad officials identified which terrorist groups those killed & injured children & civilians belonged to. The international antiwar movement is demobilized in support of bombing civilians because of its new gospel against “regime change operations.” It is the sanctity of the regime that matters, not the democratic rights of Syrian protesters.

This little guy was hit by Russian missiles that struck near IDP tents in Kafr Amim village, Idlib.

Stop the bombing of civilians! All foreign military forces out of Syria!