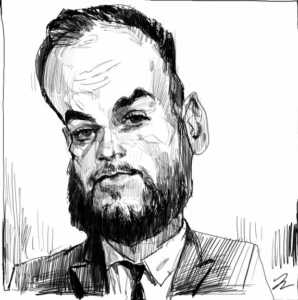 Brendan O’Neill is a British so-called journalist who typifies the metamorphosis from crazy-pants socialism to libertarianism to fascism–a trajectory come to full fruition in socialist alliances with fascists to support Assad, Maduro, & Iran’s Rouhani despite massive public protests against them. O’Neill became notorious after a 2012 article urging victims of sexual abuse by celebrities to clam up & move on without seeking justice, for opposing campaigns against racism as “poisonous” attempts to police the working class & for other such depraved political views, most especially denial of the Bosnian genocide against Muslims. He writes for the notoriously Islamophobic Spiked Online which publishes his rubbish & rants only because he edits & owns the damn thing.

Now our man weighs in on the Christchurch massacre in an article titled “New Zealand: the barbarism of identity politics,” claiming, despite the assassin’s own words, that it is not white supremacy or Muslim-hating that led to the massacre but identity politics–“the cultural fragmentation & racial paranoia unleashed by the relentless rise of identitarianism.” This singularly bizarre obsession with & opposition to identity politics is entirely rightwing although its most vociferous opponents call themselves socialists. Its proponents claim to stand for unity of the working class but their sole motivation is to sabotage efforts by the oppressed to defend themselves against violence & discrimination. Violence against Muslims, women, Blacks, Dalits, Latinos, refugees is at tsunamic levels all over this globe & is solely based on their identities. If you don’t understand that, don’t call yourself a socialist because your politics are libertarian. But mostly they are confused. If you don’t want to end up in alliance with Brendan O’Neill, reconsider your confusions before they disgrace you.

(Caricature of O’Neill from his article)