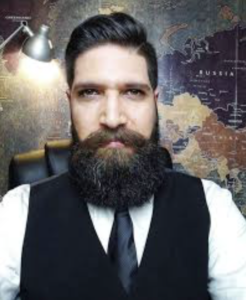 Kevork Almassian (rhymes with Rasputin) is the founder of Syriana Analysis & a prominent Assad propagandist. He’s the go-to guy for Assad propagandists Eva Bartlett, Vanessa Beeley, Tim Anderson, & is acknowledged as an invaluable source on the Arab Spring by Vijay Prashad. With the exception of Prashad (who is just politically lost), it is not gratuitous to identify all of those with fascism. They have not been shy about speaking on platforms organized by fascists, about associating with anti-Semites & Islamophobes like David Icke, or in eulogizing dead fascists as Bartlett did a member of Patriotic Europeans Against the Islamisation of the Occident (PEGIDA).

Almassian is a Syrian Christian who proclaims proudly by Twitter, on Syrian Analysis, on RT, & anywhere he can find a platform that he loves Assad & the Syrian Army & hates the Syrian Arab Spring uprising which he calls an Islamist rebellion against a secular democratic system. In 2015, he migrated to Germany from Syria saying he moved for economic reasons & not because of the war. Since hundreds of thousands of Syrian war refugees are denied asylum in Europe, many speculate that Almassian was dispatched there on behalf of Assad. In truth, if one has money, it is possible to immigrate almost anywhere.

Since arriving in Germany, Almassian associated himself with the German Alternative Party (AfD), one of Germany’s several far right extremist parties. It is as close to fascist as they can get despite attempts to mask their most virulent politics. They are rabidly Islamophobic & have associations with PEGIDA, are anti-Semitic, Zionist & pro-Israel, homophobic, anti-feminist, anti-immigrant. Almassian is making news because he’s on the staff of AfD member Markus Frauenmayer who recently became an MP in the Bundestag, the lower house of the German Parliament. Frauenmayer once served as a spokesperson for AfD president Frauke Petry who among other unsavory views promoted shooting down immigrants on the border. Almassian continues to campaign for Assad. It’s of a piece.

We don’t care what kind of associations Bartlett, Beeley, Anderson have. They’re political lowlifes who sing for their supper for the Assad dictatorship. But we would like to know what people like Prashad, Tariq Ali, Noam Chomsky, & the entire corrupted international antiwar movement think about associating themselves so closely with European fascism? Are they comfortable with that?

Do they squirm a little that their allies are the most reactionary, hateful, & violent forces in world politics? Are they going to delete all the Almassian articles, the Syriana Analysis videos, the RT interviews which they posted so they can take distance? Or do they think such contradictions are just the dialectic of history doing its thesis-antithesis-synthesis thing? We suggest they reexamine their counterrevolutionary views & stand with the Syrian Arab Spring uprising rather than the Assad dictatorship.