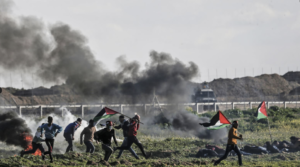 This is a panoramic view of the Great Return March yesterday in Gaza. Palestinian protesters carrying national flags are burning tires to prevent Israeli snipers from shooting them down in cold blood. You can see the Israeli armored vehicle & the outline of snipers in the hills. For what purpose against unarmed, peaceful protesters demanding the end of the blockade of Gaza & the right of return for Palestinians living in refugee camps? For what purpose other than genocide?

The UNHCR isn’t the most dynamic or aggressive agency in terms of advancing human rights but their recent claims that Israel ‘may be’ guilty of war crimes for shooting down unarmed protesters makes it easier to build the economic & cultural boycott of Israel–especially in a political climate where governments are attempting to outlaw support for BDS.