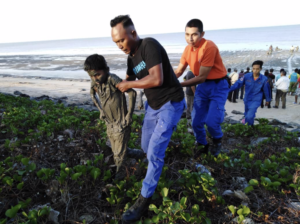 Yesterday, thirty-four tired, weak, & hungry Rohingya refugees were found on a beach in Malaysia. Local villagers said they were found covered with mud like this little guy & many were crying. It’s not known at this point whether they originated in Arakan state of Burma or in Bangladesh. It’s also not known how many other Rohingya refugees tried to make this trip but were intercepted & turned back or arrested by Bangladeshi or Thai officials. Malaysian immigration officials believe they were ferried into Malaysian waters from neighboring Thailand by human smugglers & just dumped close to shore.