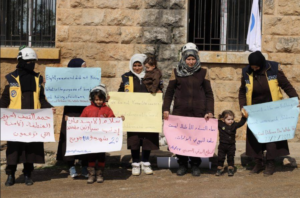 These are women White Helmet rescue workers with children protesting the recent Syrian bombing of civilians in Idlib province. Meanwhile, the Russian government at the UN recently held hearings, with fascist Assad propagandist Vanessa Beeley as their key witness, claiming the White Helmets are a front for terrorists & engaged in organ trafficking. The hearings (which are on YouTube) were an embarrassment to watch because they were more like a combination of amateur hour, burlesque, & the gong show. How the Russian government thought it could bring a discredited & disagreeable propagandist like Beeley on as their key witness boggles the mind. They expressed dismay at the lack of questions from journalists but if one looked at the audience there were very few journalists present & those few present were likely third string flunkies or satirists trying to milk some humor out of the Russian delegation making asses of itself.

The only explanation for why Russia & Assad propagandists devote so much time to vilifying White Helmet rescue workers–now for the charge of organ trafficking–is that they rankle Assad by exposing Russian & Syrian bombing of civilians. The only thing those Russian hearings proved is that Beeley & Bartlett will have a job for them with Putin when the Syrian well runs dry.

(Photo is from National Coalition of Syrian Revolution & Opposition Forces)