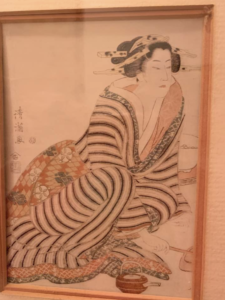 It’s observable that chief among those who advocate prostitution (what they call sex work) as just another way to earn a living are academics from upper-class backgrounds, many who identify themselves as Marxists. Would they ever consider prostitution a career option for their own daughters? Do they not see the racism, pedophilia, militarism, class character, degradation & violence so inherent to commodifying the bodies of women & children? If you want a definition of middle-class feminism, it is the view that hooking is okay for our daughters but their own were meant for higher things.

And btw, most of the eminent Marxist’s would turn over in their graves & become an important source of alternative energy if they knew their disciples promoted the commodification of human beings.

(Photo is a geisha from the Edo period in Japanese history. They were purchased as young girls & trained in the arts, intellectual discourse, & sexual practices to be  entertainment for men. As they aged out & had no more use as commodities, they were portrayed in Japanese art as bitter & angry. This woman is an example of the older geisha.)