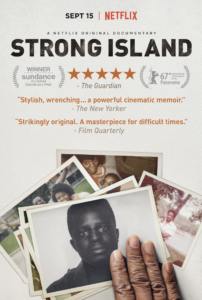 Netflix is showing “Strong Island,” a documentary by Yance Ford about the 1992 murder of his older brother William Ford, Jr. It’s a personal documentary about the trauma of a family dealing with the loss of a beloved from homicide. The social & political backdrop to the story is woven in, including the migration of their parents from the Jim Crow (US form of apartheid) South; the parent’s work to improve their economic status through education; how developers segregated Blacks from whites in new Long Island housing developments; the fallacies of the US grand jury system; the racism of the US legal system.

William Ford, Jr. was 24-years-old when he was shot by a white chop shop employee in an altercation. Mark Reilly, a chop shop tow truck driver had rammed the car of William’s mother Barbara Dunmore Ford & rather than file an insurance claim asked William if the illegal chop shop could do repairs. When they were not forthcoming with the repairs & disrespected William’s mother when she went looking for the car, there was an angry altercation between William, the owner of the shop, & Mark Reilly. When William & a friend again went to pick up the car, there was another angry exchange where Reilly shot & killed William with a rifle.

An all-white grand jury refused to indict the shooter claiming he had reason to be afraid based on the earlier altercation so the shooting was judged self-defense. William’s mother claimed the prosecutors presented a weak case to the grand jury to guarantee a refusal to indict. There was no reason for the shooter to be afraid of William unless all angry Black males are a threat to life & limb. As Yance Ford put it, the prosecution determined that William was the “primary suspect in his own murder.”

Yance Ford, who was William’s younger sister at the time of the murder, is now a transgender man who was nominated for an Oscar in 2018 for this documentary. It’s a powerful film for the way it weaves the personal tragedy of homicide in with the social history & political injustice faced by Blacks in the US.