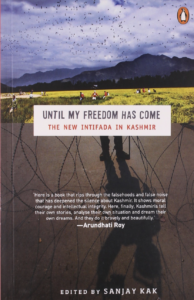 Those wanting to understand the struggle of Kashmiris against Indian occupation & colonialism may want to take a look at “Until My Freedom Has Come: The New Intifada in Kashmir”, a collection of essays edited by Sanjay Kak. It was first published in 2011 but has since been republished more than once. Sanjay Kak is an Indian documentary filmmaker of Kashmiri Pandit (Hindu) ancestry who has spoken & written extensively & cogently & made a feature-length film about the Kashmiri struggle with an undaunted commitment to azadi.
The book was sent to me by Indira Krishnamurti Pradhan when I first committed to studying the Kashmiri struggle at the prompting of Kashmiri activists. Over the years I have repeatedly referred to it & did so again recently in trying to understand the scale of violence against Kashmiris under the occupation & the Indian army’s tactical renewal of hunt to kill operations.
The essays are eminently readable in a journalistic, not academic style. The collection ends with “A Letter to Fellow Kashmiris”, a powerful call for unity in the struggle for freedom by Mohamad Junaid.