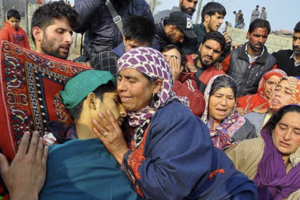 It’s not a coincidence that as the 2016 mass uprising in Kashmir was winding down in the early months of 2017, the head of the Indian Army, General Bipin Rawat, made much ado about the resumption of Cordon & Search Operations (CASO) in Kashmir, announcing them as now a permanent feature of counterinsurgency operations in Kashmir to flush out armed insurgents. The 2016 uprising was set off in July when a young armed rebel was killed by the Indian Army. (His name & image may not be put on FB without suspension although his funeral prayers were attended by at least 600,000 people.)
What’s curious about the resumption of CASOs, better termed hunt to kill operations, is that human rights activist Khurram Parvez estimated the number of armed rebels in 2016 at about 250 & Kashmiri police officials estimated them in early 2017 at 200. Hardly a scale of armed insurgency requiring nightly house-to-house raids on entire districts & dozens of towns with thousands of Indian troops, drones & helicopters. In one notorious operation in the Shopian district in May 2017, over 5,000 Indian troops were deployed, ostensibly to flush out militants.
According to the Jammu Kashmir Coalition of Civil Society (JKCCS) which monitors human rights in Kashmir, there were 540 hunt to kill operations in Kashmir during 2017–500 of them in south Kashmir called by some the “crucible of militancy” because of the scale of active opposition to occupation. The jackboot operations include cordoning off entire towns, torture & beatings of civilians, using civilians as human shields, preventing ambulances from moving the injured to hospital, ransacking & vandalizing property including homes & vehicles, killing livestock, stealing personal valuables, sexualized abuse including groping & verbal threats of violence & rape, blowing up & reducing homes to rubble–& of course the use of pellet guns, tear gas, & mortars.
What concerns the Indian government is not the growth of armed insurgency in Kashmir since by its own statistics most of them would have been killed in the past two years. The Indian Army reported 200 militants in February 2017 & then claimed that 218 armed rebels were killed in 2017 & 163 in 2018 up through October. It isn’t that there’s an exponential recruitment of armed militants in Kashmir but that there’s an exponential growth of mass & active opposition to the occupation. That’s why there are so many civilians, including women & stone pelters, who come out during the hunt to kill operations to protest despite overwhelming military force. That’s why the casualty & injury rates of civilians during these operations are so high.
The purpose of these jackboot operations is to terrorize Kashmiris into abandoning opposition to occupation & to end their struggle for national sovereignty, for freedom, for azadi. When General Rawat announced the resumption of hunt to kill operations in early 2017, Kashmiri Wasim Khalid cogently & powerfully identified it as a declaration of war against Kashmiris:
“We should be thankful to the Indian Army Chief. He has accepted that people are coming out to protect the rebels. He accepted the current political movement is run by the public who are fighting for right to self determination. He accepted there is no difference between the man with a gun & the man without a gun. Both are same. He accepted Indian army is at war with Kashmir. The only new thing today was that he officially announced a war on Kashmiris. We have been waiting for this announcement from past 70 years.”
The photo is the funeral prayers of 14-year-old Nouman Ashraf, the oldest of three sons. He was killed during a hunt to kill operation in the Shopian district on November 25th. We have witnessed enough of this suffering. It is long-since time for human rights activists around the world to rally to the defense of Kashmiris in active solidarity.
(Photo by Mir Wasim/Greater Kashmir)