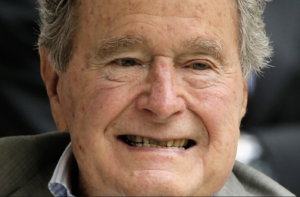 Is it too late for my anti-obituary of George Bush? Loath am I to let him pass into oblivion without a commemoration of his utter ineptitude (he never held any post for more than a year since they were afraid of the damage he would wreak) except at racist malice. Despite mythology, he would not have succeeded in the oil business were it not for investments by his family & their financial connections–& possibly also associations between the CIA & his oil rigs in the Middle East & Caribbean, but that is not proven beyond dispute.
The NY Times used to post full transcripts of presidential press conferences & seem to have ceased that practice when his inability to put a coherent sentence together exposed the presidency to ridicule even more than Trump’s tweets. He was known for being obsequious to power & insolent to those he deemed inferior. But what he should be most remembered for is his racism & the wreckage he created in the Black community. As vice-president involved in Contragate & as head of the CIA, he was directly involved in drug trafficking to finance paramilitary terrorist groups, particularly but not only the Contras against the Sandinistas in Nicaragua. The US Congress had cut off funding to the Contras so US officials persuaded drug cartels to contribute millions to the Contras in return for not just turning a blind eye but facilitating drug trafficking into the US. To cover the criminality of this enterprise, Bush scapegoated Black teenagers & vilified them as narcoterrorists which justified police violence & martial law in the Black community. On one occasion, he directed federal agents to induce a 17-year-old Black kid to sell dope in the park across from the White House so they could arrest him & Bush could use that to dramatize the drug problem in a speech. That young kid spent 8 years in jail to make Bush’s so-called war on drugs look good. Thousands of Black & Latino kids went to jail for life without parole for minor drug infractions, as minor as smoking a joint.
It is entirely suitable that he stood accused of sexual misconduct in the final years of his life. Let that & his detestable racism stand as his epitaph. If we mourn anyone it is the Black teenagers who continue to die because of the policies this lowlife set in place. Amen.