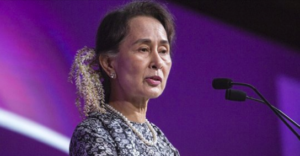 Amnesty has stripped Aung San Suu Kyi–the genocidaire who wears flowers in her hair–of its highest, if not also entirely worthless, honorific. This is only the latest of several human rights awards taken from her, including Canada’s honorary citizenship, plaques from Aberdeen, Edinburgh, Glasgow, & Oxford. What took them so long? It’s quite inscrutable what she gets out of being a central figure in genocide but because of her father’s role in Burmese history, she may see her own role in some imagined epic or mystical way. She has to know that history will not judge her more favorably than Kissinger or Hitler but deems such ignominy worth it.

When researching Suu Kyi for articles I wrote in Pakistan Today in 2017, I learned there isn’t much there-there to her human rights record. It’s not entirely certain why she was considered a human rights icon except speeches she gave during the national uprising of 1988. But she wouldn’t even have been in Burma if she hadn’t gone home from England just then to attend to her ailing mother. Her role is almost accidental except that both parents were leading political figures, including her mother who worked for the military dictatorship as an ambassador. There was no fall from grace for Suu Kyi so much as a snow job by the organizations handing out honorifics. If Kissinger can win the Nobel Peace Prize, why not Assad or Adolf Hitler? Or Suu Kyi? When she was under house arrest, it was in a family mansion in the most exclusive area of town attended to by servants. Not exactly a gulag.

These are the articles I wrote about Suu Kyi: