No need to throw the baby out with the bath water but Amnesty is really discrediting itself with its 2015 report blaming Hamas for Israel’s genocide of Palestinians & its 2018 report blaming ARSA for Burma’s genocide of Rohingyas. It’s beyond shameful to politically collusive with the darkest forces in world politics. 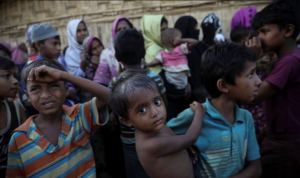 Let’s talk about that absolutely appalling Amnesty report titled “Myanmar: New evidence reveals Rohingya armed group massacred scores in Rakhine State” which is a sustained indictment of ARSA (Arakan Rohingya Salvation Army) for “killings & violent attacks against members of Hindu & Buddhist ethnic groups.” First we’d like to know how Amnesty got access to Arakan state since it ends its dishonest report with a call for Burma to “immediately allow independent investigators, including the UN Fact-Finding Mission, full & unfettered access throughout the region.” Were Amnesty investigators allowed special access by the regime? Were they escorted by regime officials? Were restrictions placed on where they went & who they interviewed? Why was Amnesty investigating ARSA who they claim killed 99 Hindus rather than the Burmese military & Buddhist death squads who killed, tortured, raped thousands & sent 700,000 fleeing for their lives? What’s up with that Amnesty? Where’s the sense of proportion?

Amnesty claims that accountability for atrocities is just as crucial for irregular forces as for security forces. Of course, even though the magnitude of the genocide against Rohingyas dwarfs the alleged crimes of ARSA. But the actual charges of Amnesty against ARSA really cannot be considered seriously until Amnesty lays out for us its methodology, who escorted them, what restrictions were imposed by the regime on their investigation, & why Amnesty was allowed access when even the UN has been barred entry.

The fatal flaw in this report is their assertion that the genocide was prompted by ARSA attacks on 30 police posts & an army base, a number which most likely came from the Burmese government. But Rohingya activists, the citizen journalists who were disappeared in the genocide, claimed the military was deploying additional forces in Arakan & preparing for the genocidal onslaught long before August 25th, 2017 when the alleged ARSA incitement took place. Does Amnesty really think it reasonable to blame a handful of irregular ARSA forces for inciting a state-sponsored genocide of such a colossal scale?

To put this report in context, Amnesty issued a report in 2015 on Israel’s 2014 seven-week bombing onslaught over Gaza which was just as shameful as this piece of rubbish on ARSA. The report on Gaza justifies Israel’s murderous siege by claiming it was bombing “possible military targets” in response to thousands of Hamas rockets & mortars (the evidence of which does not exist) when it bombed ambulances, hospitals, schools, apartment buildings, refugee centers in Gaza.

There’s a shameful pattern to these reports: Amnesty’s equation of self-defense with military aggression. That equation allows Amnesty to water down the genocidal aggression of Israel & Burma & in that regard these reports are absolutely worthless apologetics. What should concern Amnesty, or at least it should have been mentioned in the report, is the apparent disappearance of ARSA in the past several weeks. Wouldn’t that suggest that the real perpetrator of atrocities in Arakan state was in fact the military & its auxiliary Buddhist death squads? One doesn’t have to be a supporter of guerrilla warfare to understand that in a genocide, ill-trained & inadequately armed irregulars like ARSA had a right to defend unarmed Rohingya civilians. Whether or not they committed human rights crimes against Hindus should be investigated within the context of a genocide against them–not to rationalize their acts but to understand how & why they occurred. As Javed Akhtar commented on Twitter: “If there is a mass grave of Hindus,” as Amnesty claimed, “it must be the army’s doing. Or why were hundreds of Hindus also escaping with Rohingyas?”

Shame on Amnesty. It’s a pity they compromise their credibility by such unsubstantiated & worthless reports that amount to apologetics for genocide.

(Photo of Rohingya refugees in Bangladesh by Marko Durica/Reuters)