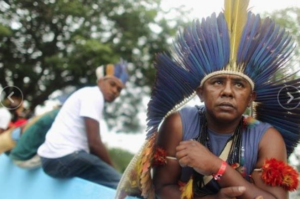 There are many articles & memes circulating about impending doom for the rainforest in Brazil since fascistic Jair Bolsonaro was ‘elected’ president. He’s part of the global capitalist lurch to the right which includes Trump, Duterte, Suu Kyi, Assad, Modi, Putin, Netanyahu, Erdogan, Maduro, Ortega, Xi. Predictions are that Bolsonaro will eviscerate environmental agencies & laws, green light destructive hydroelectric projects, eliminate demarcation of reserves for dispossessed indigenous tribes to accommodate foreign agribusiness, & open up the country to strip mining projects. Of course he will. But none of that is distinguished from the liberal regime of Dilma Rousseff who was ‘elected’ in 2011 & illegally impeached in 2016. During her tenure, there were millions in the street protesting her policies, including Amazonian tribes fighting dispossession enforced by the Brazilian army & paramilitary thugs hired by mining & agribusiness corporations.

What’s different in the case of Bolsonaro vis a vis Rousseff (or Trump vis a vis Obama), et al, is the tempo of reversing social, political, & democratic gains made through the 1970s & 1990s. Capitalism is in crisis globally & in a headlong rush to resolve it off the backs of working people through neoliberal austerity policies. To fully implement these policies in the interests of corporate plunder, it is essential to curtail the right to protest & resist. Thus we see the increasing militarization of the police throughout the world, exacerbated ethnic & religious conflicts from scapegoating, the election of extreme rightwing politicians despite their lack of majority support. These policies are one of the primary causes for unemployment, massive population displacements, growing urban slums, & the refugee crises (most notably in Africa, Central America, South Asia) & for war (as in the Middle East). Islamophobia & the terrorism boogieman are not only to justify all this but also because the peoples of the Arab Spring uprisings were among those leading the most massive, powerful, & uncompromising resistance to neoliberalism & tyranny.

It does indeed impend doom that Bolsonaro was appointed president–just as it did when Trump was handed the election despite losing it to Clinton. It isn’t that Rousseff or Clinton would have presided over the capitalist crisis in a kinder, gentler way but that their populist demagogy would have significantly slowed the course of implementing neoliberal austerity policies.

The response to all this should not be panic that the sky is falling. It should be that working people reclaim an active role, despite political repression of protests, in standing up to these policies to demand our rights to free speech & assembly & force these regimes to retreat. In that regard, forging links of international solidarity are of the essence since the key feature of neoliberal capitalism–the barbaric phase of capitalism–is global plunder. To neoliberal globalism, working people respond with international solidarity which is the iron law of social transformation. There is no other way.

This photo is members of indigenous tribes from the Brazilian rainforest protesting along with 50,000 environmental groups & social movements at the 2012 Rio+20 conference in Rio de Janeiro against mining & hydroelectric projects, the dispossession of their lands, & the environmental destruction of the rainforest. Note that this was under the regime of Dilma Rousseff.

Repost from November 26, 2013 on Guarani struggle: 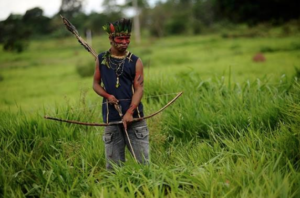 Since October Guarani Nandeva Indians have occupied over 14 “farms” outside the municipality of Japora in the state of Mato Grosso do Sul, Brazil–claiming them as their ancestral lands–& legally declared so by the Brazilian Supreme Court in 2005. This young man stands watch at a roadblock they built to keep “farmers” out after an occupation (Nov 22nd).

The so-called “farms” are soybean & corn plantations & the “farmers” are transplanted US Midwesterners transmogrified into Brazilian plantation owners. As US farms ceased soybean production in favor of corn for the ethanol market (from the early 1990s), soy production increased at the rate of 14% a year in Latin American countries of the Amazon Basin, leading some to call the region Soylandia. Brazil, the heart of Soylandia, is now the world’s biggest soybean exporter as well as a leading exporter of beef, poultry, pork, ethanol, sugar (primarily from corn), & other products. Mato Grosso is now the largest soybean producing state in Brazil.

Soybean production & the growing corn & sugarcane industries are massively contributing to deforestation & global warming by pushing cattle ranchers further north into rainforest zones (according to an environmental study). The main demand for soybeans is not culinary as tofu & miso but industrial as nontoxic & biodegradable products to replace petroleum-based polyurethanes in paints, solvents, textiles, lubricants, plastics, foam insulation in construction, foam cushions in car seats, backing for artificial turf, & as biodiesel. As one media source reports, “Brazil is positioned to become the Saudi Arabia of biofuels.”

The considerable commercial stakes for agribusiness more than explain the extreme violence used against the Guarani & other Indigenous peoples of Brazil. Their ancestral lands have been forcibly taken from them & claimed by agribusiness interests with private militia & goon squads while the Brazilian government auctions off the lands at bargain basement prices. Every year dozens of Indigenous activists are assassinated. Their communities have been torched & they are forced to live in roadside encampments overlooking the ancestral lands which were the foundations of their economic, cultural, & spiritual lives.

The Guarani have continually fought for their land rights–in the courts, in the legislature, & in public protest & have been answered with physical intimidation & legal appeals justifying theft by plantation owners & occupation & forcible evictions by Brazilian military & police. The Brazilian government conducts a regular dog & pony show of legal & legislative maneuvers to convince the Guarani they stand a chance of having their lands demarcated against the incursion of plantations. But as of only a few years ago, only seven territories were mapped of the 600 tribal demarcation plans pending.

The Guarani & other Indigenous peoples cannot stand alone forever with bows & arrows against ruthless military arsenals. The increasing & very high suicide rate among their young shows the toll this struggle for survival is taking on them. Their struggle is not just for their land rights but in the interests of global ecology. An active solidarity with them is in the interests of all humanity & we need to start looking for effective ways to assert that solidarity.