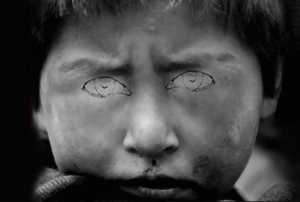 Reposting this from a year ago as part of campaigning against the use of pellet guns on unarmed protesters in Kashmir.

It’s estimated that about 14-percent of pellet victims in Kashmir are under 15 years of age & as young as four. Probably most are in their 20s & teens but there have been reports of seniors near protests who were injured by pellets & other munitions. A huge percentage of them will never regain their vision; they will suffer permanent pain & health problems from lead pellets that cannot be excised from internal organs; most will suffer some measure of disfigurement.

The use of pellet guns is a human rights crime, illegal under (albeit unenforceable) international laws governing the use of excessive force against unarmed civilians. In response to legal action against their use in Kashmir, the Indian military argued that if pellet guns were banned there would be more civilian fatalities because the army would be forced to use live ammunition–a defense that documents the short political & psychological distance between militarism & derangement.

If we do not collaborate internationally in banning the use of pellet munitions, we will all be dealing with them as the militarization of policing continues to grow.