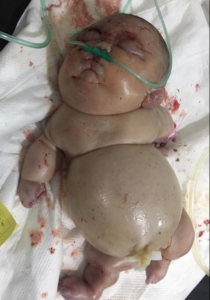 This is an Iraqi infant born with skeletal dysplasia, a genetic condition affecting bone & cartilage development. It is a genetic condition caused by mutation in one of our genes–a mutation which can be caused by the chemical affects of US bombing. This is only one of the millions of Iraqi children affected so cruelly by US military intervention in Iraq & is among those who Madeleine Albright considered dispensable–whose suffering was, as she put it, “worth it”–to fulfill US military & policy objectives in Iraq.

This wee child is a human being with as much value as all our other children. That she is disfigured & will suffer unbearably during a very brief life is our concern, not that she is less human than the rest of us. No human being is alien to us.

Hopefully, those calling for humanitarian US military intervention in Syria will see this small child & understand that she represents the character of US militarism. There is no other possibility. There is no humanitarian potential in US bombing. Such rubbish is a dystopian & rightwing pipe dream. Under the guise of saving the Syrian Arab Spring uprising, they chide us to get over our Iraq syndrome in the same way as the Pentagon & US media worked us over for decades to get over the Vietnam Syndrome of opposition to US military interventions. But those who care about children–who are always the first victims of war, occupation, genocide–oppose all military intervention except that of self-defense.

US out of Iraq, Afghanistan, Syria, Yemen, Libya, Somalia!