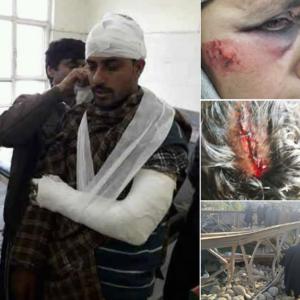 These are Kashmiri civilians assaulted by Indian occupying forces during one of their rampage of hunt to kill operations. These men & women are not what the US Pentagon euphemistically calls “collateral damage” but are intended targets to intimidate & destroy resistance to the occupation & to thwart the struggle for independence.

(Photos from Mirwaiz Umar Farooq, a leading figure in the independence movement)