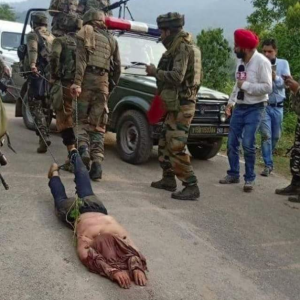 An Indian nationalist just left this comment on my wall regarding India’s brutal military occupation of Kashmir:

“Mary Scully, you are right when you say there’s prejudice against the people of Kashmir from most Indians. But there’s no way we can sympathize with these militants who answer with violence and has created havoc in the valley. Take example of Kashmiri Pandits who were thrown out from their own lands being called ‘kafirs’. Many of these militants join hands terrorist cells from Pakistan and does attacks on several areas which also include Muslims, so it’s not just the non-Muslims alone that suffer. Just recently, the families of 10 JK police officers were abducted and still kept in their custody (see news). How can you justify this? I definitely sympathize with the cause of the Kashmiriyat and support them but I can’t sympathize with these violent militants. The security of our country is at stake. And no, the whole Indian media isn’t biased as you think.” (by Susheel Kp who may be the pseudonym of a nationalist troll)

Note how using a tone of nauseating pity he hits all the Islamophobic buzzwords like the alleged persecution of Kashmiri Pandits (Hindus), terrorist cells from Pakistan & stone pelters. The occupying army–engaged in pellet guns against unarmed civilian protesters & funeral corteges, forcible disappearances, arbitrary detention of youthful protesters, mass rape, assault, harassment, increasing hunt to kill operations–are portrayed as victims of Kashmiri violence & Indian nationalist media is portrayed as vilified & unbiased. We’d just like to ask our man how his delusions accord with this photo from Kashmir today of Indian soldiers desecrating the body of a militant killed in a hunt to kill operation where six others were also gunned down. This is the character of the occupation so our nationalist can stuff his sickening pity where the sun don’t shine.

Our respect for the man who is being desecrated. May he Rest In Peace.