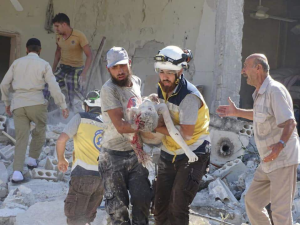 The siege of Idlib has begun with the massive deployment of Syrian, Russian, & Iranian ground troops & terror bombing of an estimated three-million people, many of them refugees displaced by bombing from other parts of Syria. Assadists are proclaiming this a liberation from ‘jihadi terrorists’ & the triumph of Assad’s national sovereignty. Others who do not understand the counterrevolutionary role of the US-coalition are quoting the wimpy-assed protests of Nikki Haley, Mike Pompeo, & Donald Trump & pathetically hoping for salvation of the revolution by the US Pentagon.

Idlib represents the final battle of the momentous Arab Spring uprisings that began in 2011 & which have all been vilified as ‘Islamist jihadi’ uprisings orchestrated by the CIA & Mossad. Where are the antiwar protests demanding no bombing of Idlib? There are none because the moribund & corrupt remnants of the antiwar movement support bombing civilians in the interests of Assad’s national sovereignty. Racism toward Arabs & Islamophobia have fully taken their revenge on the Arab peoples of Egypt, Yemen, Bahrain, Syria, & the Palestinians. This is a watershed moment in human history in which progressives around the world, not just in the west, showed their utter political bankruptcy by supporting dictatorship, counterrevolution, & the bombing of civilians in Syria. There is no political regeneration possible after such a catastrophic betrayal. Those who supported this carnage & genocide should skulk off the stage of history into ignominy.

The only principled demands are for the immediate cessation of bombing in Syria by Syria, Russia, & the US-coalition & for the immediate, unconditional withdrawal of all foreign military forces from Syria.

Photo is White Helmets rescuing victims from the rubble of Russian bombing in Idlib.