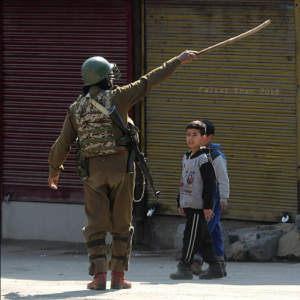 This is Kashmir. It could be Palestine. The censorship on social media against Kashmiri & Palestinian activists is intended to hide this daily aggression against civilians, especially little kids. If the occupying armies can intimidate & terrorize children, they can end resistance, because in the end they are terrified children will continue the tradition of resistance until freedom is won. There are analogs in US history in the treatment of Black, Latino, & Native American children reflected most powerfully in what is called pickaninny “art”–a deranged cartoonish genre ubiquitous until the civil rights movement which focused on Black infants holding by one arm to a twig suspended over an alligator pit. It’s malignancy can only be explained by its terror of Black youth resistance to oppression, That’s why children are directly targeted in Kashmir, Palestine, Syria, & elsewhere.

Stand with Kashmiri & Palestinian kids & demand the end of occupation & self-determination for Kashmir.