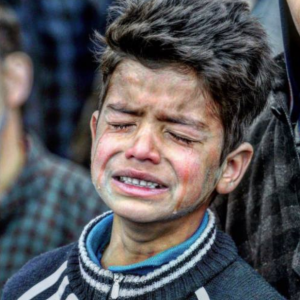 Reposting this from March 9, 2017 because it is certainly among the most powerful images of children suffering war, occupation, persecution, genocide. His grief speaks for children from refugee camps to war & occupation zones & is a call to action for all men & women of good will:
**********
A boy mourns the deaths of young men killed by Indian occupying soldiers in Pulwama, Kashmir. May those who died Rest In Peace. Heartfelt condolences to those left to grieve.

There is nothing left to be said except building international solidarity & demanding India end the occupation is a political imperative. Kashmiris have stood alone in their historic struggle long enough.