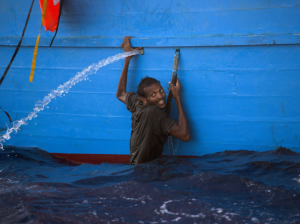 The UN refugee agency (UNHCR) reports that so far this year just over 334,000 refugees have arrived in Europe on all three of the major Mediterranean routes: from Turkey to Greece, from Libya to Italy, & from Morocco to Spain. That’s compared to 1,016,000 in 2015 but of course this year Frontex (the EU border control agency), European navies, & NATO ships are intercepting refugees & turning them back.

The UNHCR used to report the number of drownings & missing persons per route but this year changed to reporting the overall number of deaths on all the routes. As of now, they report 4.220 deaths in 2016, many of them infants & small children, making this year the deadliest year on record. With three times the refugees in 2015, there were about five hundred fewer deaths. From sketchy reports in media & other sources, we know most of those deaths are of those in capsized, overcrowded dinghies who departed from Libya to Lampedusa, Italy, the longest & most dangerous route.

Thousands are reported rescued on the Libya to Lampedusa route but it is often by fleets operated by NGOs like Proactive Open Arms & Doctors Without Borders. When the Italian coast guard reports rescues it isn’t certain how many were by its fleets & how many by the NGOs since in the past Lampedusa officials & fishermen have accused the Italian coast guard of intentionally bungling rescue operations & letting refugees drown.

The unspeakable outrage of these deaths, for which there should be criminal culpability, is that Frontex & additional naval fleets from Europe are patrolling that route across the Mediterranean Sea with high-tech surveillance equipment. There is no excuse for the drownings of 4,220 people. Those are human rights crimes & should be prosecuted as such.

UNHCR also monitors Rohingya refugees fleeing Myanmar & Bangladesh across the Andaman Sea. Between January & May 2015, an estimated 25,000 Rohingya fled on that route & were adrift in boats without food or water after being refused landing. Only 1,107 were rescued & allowed to land in Malaysia & only 1,807 in Indonesia. Just over 1,000 were picked up by the Bangladesh & Myanmar navies. The UNHCR estimates 5,000 were abandoned by human smugglers but does not denounce Thailand for refusing Rohingya refugees or for the refusal of Indonesia & Malaysia to launch search & rescue operations. Fishermen brought the boats to shore. Beside the fact that their numbers don’t add up, no agency, including the UNHCR, has ever made an accounting of what happened to the thousands abandoned & not rescued but still inexplicably report deaths from 70 to 300.

The UNHCR cannot be prosecuted for slipshod monitoring but it sure as hell should be held accountable for the racism implicit in its monitoring systems, for its refusal to expose & denounce countries & the European Union for refusing asylum, endangering the lives & causing the deaths of tens of thousands of refugees.