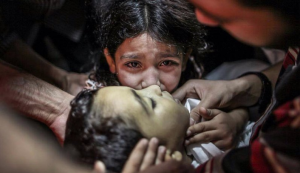 This child is actually from Gaza during Israel’s 2014 carpet bombing siege that lasted seven weeks. It’s one of the least gruesome images of the 495 children killed in that offensive. I misidentified it as children from east Ghouta in Syria during Syria & Russia’s current bombing siege of civilians. It is profoundly sad that the little ones could be from any number of countries today facing war, occupation, or genocide.