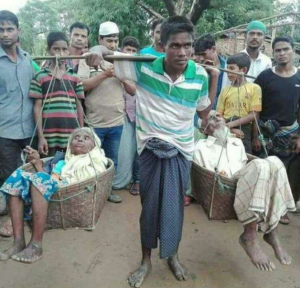 The latest estimate of new Rohingya refugees seeking asylum in Bangladesh is 300,000. There’s plenty cause for criticism of the Bangladeshi government but it now has nearly 800,000 Rohingya refugees & needs help from other countries in addressing the humanitarian crisis. Of course, since only a few countries have raised even a peep of protest against the genocide, it’s unlikely most will lift a finger to help provide shelter, food, healthcare, or asylum to the Rohingya–especially with so many political forces claiming there is no genocide but only communal violence & Rohingya terrorism.

That’s what makes the ongoing protests in solidarity with the Rohingya people so important. We must demand not just an end to the genocide but humanitarian aid & rights for the refugees, including the right of asylum in other countries (including our own).

Photo is a Rohingya refugee who fled from the military carrying both parents in baskets. There are countless photos of refugees carrying parents on their backs or in baskets like these, of unaccompanied children carrying siblings, of course parents with children & infants, & that wrenching image of the little girl carrying her baby sister in the rain. That’s the breadth of spirit we should try to emulate in building solidarity with their struggle against genocide & for full human, democratic, civil, & refugee rights, including massive humanitarian aid in Bangladesh.