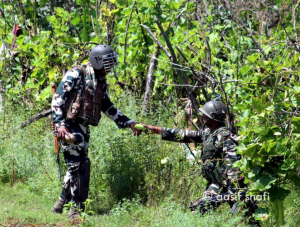 A brilliant piece of satire by photojournalist Aasif Shafi:

“Indian security force personals rescuing cucumbers from vegetable fields near encounter site at Awreene village of south Kashmir’s Shopian district. It seems they were more worried about the safety of cucumbers than anything else. As per last reports, several such cucumbers were rescued and later on consumed with full guard of honour including 21 rounds of gun salute and standing ovation. Meanwhile,these brave soldiers were nominated for National award with immediate effect.”