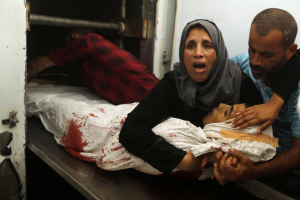 There are so many funerals for young people murdered by the occupying armies in Kashmir & Palestine that one cannot report all of them, let alone keep up with all of them. Mostly those targeted are young men, as if destroying the lives of young freedom fighters will magically end the struggle when in fact the death of every martyr inspires deeper resistance & commitment to freedom.

This is the mother of 16-year-old Palestinian Abdulrahman Abu Hmaisa preparing him for burial. He was executed by Israeli troops while protesting from Gaza along the apartheid barrier against the blockade & against the violence at the Al Aqsa compound & in the West Bank.

Our sincere condolences to young Abdulrahman’s family & friends, May he Rest In Peace.