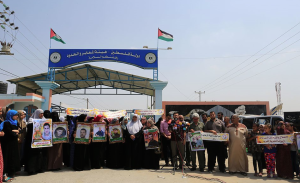 Who was it said Palestinians have no traditions of peaceful protest? Who is it that maligns them as terrorists like the Israeli government does when they protest apartheid, ethnic cleansing, carpet bombing, colonial expropriation?

These are Palestinians from Gaza at a checkpoint on the apartheid barrier with Israel protesting Israel’s ban against family members visiting their kin imprisoned in Israeli jails. Very peaceful indeed even though Israel cages them in like animals in Gaza, arrests & shoots at them for resistance, vilifies them as terrorists, carpet bombs them to the point of collapse.

It isn’t that Palestinians do not have traditions of peaceful protest but that they have 69 years of unrelenting opposition of every kind to colonial barbarism.