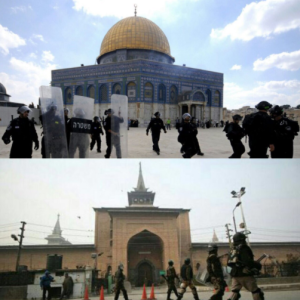 The military aggression against these two mosques is part of occupation but it is also part of the orchestrated campaign of Islamophobic hysteria, persecution, discrimination, & violence against Muslims that is the pivot of war & fear mongering today.

Religious freedom for Muslims is a democratic right that must be defended from East Jerusalem to Srinagar. From Amsterdam to Paris to London to NYC.