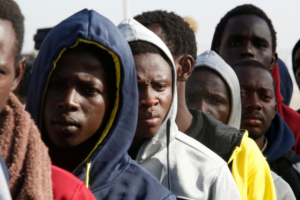 It’s an unpleasant but necessary part of politics to polemicize & point out the problems of those who obstruct the process of solidarity building. When they are as dreadful & dishonest as those who support Assad’s dictatorship or who concede an inch to Islamophobic war & hate-mongering & who have taken a wrecking ball to the antiwar movement & Palestinian solidarity, then there is no call for kid-glove treatment. There are no respected elders, no gurus, no masters.

Tariq Ali has been a train wreck on Syria, posting anti-Semitic Eva Bartlett, a Mint Press article claiming the White Helmets are ISIS affiliates who kill babies for PR stunts, US military officers & libertarian white supremacist Lew Rockwell to document his support for Assad. Today he posted a blog called “The Muslim Issue” for the title article “Libya After Dictator Gaddafi: Muslims Sell Blacks For $200 At Open Slave Markets.” With that, his metamorphosis into stink bomb is complete.

Several media sources have recently reported on the emerging slave trade in Libya where about 500,000 African refugees are waiting to cross to Europe. This is a disturbing & horrific development related to the exploitation of refugees & immigrants & directly tied to racist immigration policies.

Not a single media source cited the religion of the slave traders because it is not relevant, is not known, & because they are a godless lot who answer to no god but mammon. So why did the Oxford-educated, elite intellectual feted on every continent as an authority on progressive politics post one of the most hateful, lying-assed, vile pieces of Muslim-hating rubbish he could find?

Yesterday when he posted Lew Rockwell who any honest person wouldn’t touch with a ten-foot pole, we asked “whither goest Tariq Ali?” Today we don’t ask. Today we don’t give a rat’s ass. He’s a goner.

This is the Islamophobic blog posted by Ali. Take a look through it to see just how vile & hateful it is:

(Photo is African refugees in Libya from AP)