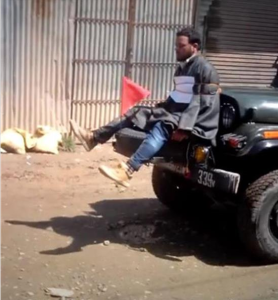 A few days ago, Indian media (which on the issue of Kashmir is not unlike Fox News) waxed indignant at the video of a CRPF Jawan on poll duty in Srinagar being heckled & manhandled by Kashmiri youth as he walked down the street. Before we cry crocodile tears about the poor fully-armed soldier getting roughed up a little, we should take a look at who the CRPF soldiers are & what they represent to Kashmiri youth.

There are 70,000 CRPF Jawans deployed in Kashmir. They are Indian paramilitaries, special forces, & the very military units involved in search & summary execution operations, the ones using pellet munitions, live ammo, tear gas against unarmed civilians rushing to prevent other Kashmiris from getting raped, beaten, murdered during these encounters. You bet your sweet ass that Kashmiri youth have an attitude problem toward these soldiers.

Only two days after Indian media was waxing nationalistic rubbish about their beloved CRPF Jawan getting roughed up by Kashmiri youth, a video went viral on social media showing the CRPF tying a young Kashmiri protester to the front of an army jeep leading a caravan of armored vehicles & using him as a human shield against harassment & stone throwers. A soldier’s voice in the CRPF video is heard announcing “Those who throw stones will meet the same fate.”

Mehbooba Mufti, the Chief Minister of Jammu & Kashmir (an official of Indian colonialism) defended the army saying the young man was tied to the jeep to prevent bloodshed.

Let us cite for Chief Minister Mufti the Geneva Conventions & the statutes of the International Criminal Court about using civilians as human shields: it constitutes a war crime. Smacking a guy in the arm, hitting him upside the helmet, or nicking his shin with a sneaker may be bad behaviors but they are not war crimes. They are petty-assed revenge for shooting down your neighbors, friends, & classmates in cold blood. And yet India has arrested five Kashmiri youth for the incident & is hunting down others. Where are the formal charges for shooting down unarmed youth in encounters? Where is the outrage & where the formal charges for tying a young guy to a jeep & using him as a human shield?

Save the crocodile tears. End the occupation. Self-determination for Kashmir.