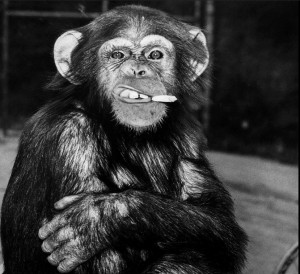 This photo of Frankie, a chimpanzee at the Griffith Park Zoo in Los Angeles, is from 1953. The caption exposes the light-hearted contempt justifying captive animals in squalid conditions. It said: “New arrivals at Griffith Park Zoo are too upsetting to Frankie, the monkey. Too much noise, he commented, as he lit a cigarette & decided that he’d ignore noisy elephants.” What a chuckle it must have been to see a chimpanzee pose like a hard-boiled hustler out of film noir.

In the days before animal rights & welfare, many were uncomfortable with zoos & their obvious cruelty but there was no activism on the animal’s behalf. This odious photo was considered amusing rather than a call to arms to close the damn things down. Though the Griffith Zoo was closed in 1966, the animals were relocated to a new one. There’s no word on what happened to Frankie.

There is some mythology associated with the Griffith Zoo claiming a curse was placed on the land in 1863 by a young woman left out of her land baron uncle’s will. They say the place has been plagued with wildfires, murder, plagues, & pestilence. But it appears, judging from Frankie, that captive animals got the worst of it.

Many claim zoos are used for conservation & to fight extinction.That makes good PR but there is far more evidence of animal cruelty than conservation.