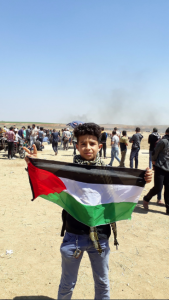 This is 8th grader Abdallah Naser protesting today against the opening of the US embassy in Jerusalem. When asked why he was protesting on the first day of school summer break, he said “I’ve finished school & now I am to teach Israeli soldiers.” And yet we are reading from Zionist bloggers that Palestinians shot dead by Israeli snipers are part of ‘Hamas terrorist cells’ trying to sneak across the apartheid barrier under the cover of burning tires. According to the rabid bloggers, driven by a genocidal hatred of Jews, these ‘Islamic jihadis” waving Palestinian flags & swastikas will attempt to annihilate the entire Jewish people of Israel by tearing their hearts out. At least now we know where Assadists get their rhetoric from. By the way, the swastika thing came from a doctored photo released by the Israeli army & yet the bloggers ate it up. So much for truth in reporting. But at least now we know Bartlett & Beeley got their training for Syria from Israel.

(Photo of little Abdallah from Great Return March on Twitter)