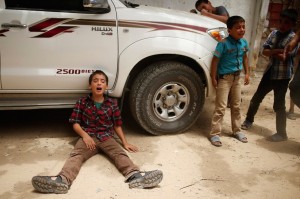 Bernie Sanders supporters are proudly circulating reports that comedian Sarah Silverman tweeted her endorsement of his campaign. That’s no surprise since last year she hosted a Sanders rally in Los Angeles.

Sanders supporters who also support Palestinian justice & BDS must be unaware of Silverman’s active & strong support for Israel which she has shown in several ways but most ignominiously in support of Israel’s murderous seven week carpet bombing siege of Gaza in 2014. During that siege, an organization called Creative Community for Peace published a statement in several entertainment journals signed by 190 Hollywood celebrities including the most prominent Zionists like Mayim Bialik & Haim Saban, the Zionist financial backer of Hillary Clinton; & political reactionaries like Arnold Schwarzenegger & Kelsey Grammer.

Silverman also signed the statement which said in part, “Hamas cannot be allowed to rain rockets on Israeli cities, nor can it be allowed to hold its own people hostage. Hospitals are for healing, not for hiding weapons. Schools are for learning, not for launching missiles. Children are our hope, not our human shields.” That puts Silverman not only in the company of Haim Saban but also Elie Wiesel, Zionism’s archdeacon who circulated an ad in several publications during the 2014 siege accusing Palestinians of using their children as human shields.

Creative Community for Peace is a pro-Israel group founded in 2011 to bring together “prominent members of the entertainment industry to counter the cultural boycott against Israel & promote an accurate image of the Jewish state.”

Sarah Silverman is ‘feeling the bern.’ Meanwhile Gaza is becoming uninhabitable from repeated Israeli carpet bombing sieges. Human Rights groups have detailed several human rights crimes, including the use of white phosphorus munitions in one siege & directly targeting children. In the 2014 siege alone, 2,310 people were killed, including 521 children; 11,000 were injured including permanent disability from losing limbs; over 100,000 were made homeless.

It’s a cliche that ‘politics makes strange bedfellows.’ But in the politics of expedience over principles, that’s actually the norm. That explains the other cliche that those who lie down with dogs get up with fleas.

(Photo of children in Gaza during 2014 siege from Ibtimes)