After posting this, I learned that Zika may be more related to a Monsanto larvicide than it is to a mosquito. That is obviously an extremely important development that Monsanto & its representatives in government will want to bury. Here is a link regarding that  charge: http://www.gmwatch.org/news/latest-news/16706-argentine-and-brazilian-doctors-name-larvicide-as-potential-cause-of-microcephalyhttp://www.gmwatch.org/news/latest-news/16706-argentine-and-brazilian-doctors-name-larvicide-as-potential-cause-of-microcephaly 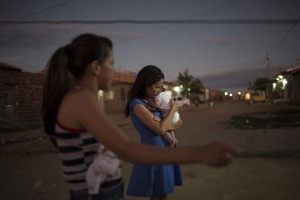 The epicenter of the Zika virus epidemic appears to be poor communities in Brazil & there is concern that it will spread to other impoverished countries on other continents. The epidemiology of disease really needs to stop worrying about mosquitos & start thinking about the absence of healthcare, clean water, & nutritious, sufficient food under neoliberal austerity regimes. Mosquitos have no particular affinity for poor people’s blood.

There are a wide range of health issues for children born with microcephaly, suspected to be related to Zika. They will sustain incapacitating mental & physical disabilities including seizures, difficulty walking or standing, difficulty speaking or swallowing, hearing or vision problems leading to blindness.

Brazilian officials report that in 2014, 150 babies were born with microcephaly but since October 2015, nearly 4,000 babies were born with it, mostly in poor communities. Disability is difficult to manage even if you have sufficient resources & live where there are schools & available therapy for the children to maximize their potentials & live satisfying lives. Poor communities in Brazil would not be optimal places to raise children with severe disabilities.

But in the dozens of photos of family members–brothers, sisters, mothers, fathers, grandmothers–holding their babies with microcephaly, there is nothing but tenderness & when reporters ask the mothers about their babies, they say they will love & care for them as any other.

It wasn’t that long ago in the US that parents of severely disabled children requiring lifelong care were advised by doctors to warehouse their children & forget about them. They were often part of freak shows in traveling circuses. That was the barbarism of just a few decades ago.

These epidemics affecting the health & wellbeing of thousands of children are an issue directly related to the barbaric phase of capitalism. Healthcare, clean water, & nutritious food are a human right regardless of their status under laws made by billionaires.

This photo is taken in Santa Cruz do Capibaribe, Brazil. Milena Kaline, who is three months pregnant, holds her friend’s daughter born with microcephaly.