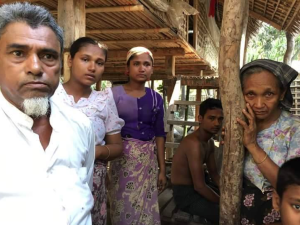 Ziaur Rahman, a Rohingya human rights activist, sent me news about the violent crackdown against Rohingya in Arakan state in Myanmar going on right now. You can imagine the distress of Rohingya refugees unable to contact their families to find out what is going on. This is Ziaur’s statement:
********
“Who keeps speaking & working for the end of extra-judicial killings, attacking on Rohingya civilians & arbitrarily arresting Rohingya in Arakan State of Myanmar???

I don’t want to write details right now about ongoing massacre of Rohingya in Maungdaw. Later I will try to update what the hell is going on there by killing & cleansing Rohingya? This is the time to stand & request to the international community, world leaders & Rohingya activists & supporters to protest for calming down Arakan & take action against criminals who committed crimes against humanity.

There are pictures of Myanmar army providing guns to Rakhine Buddhist civilians to kill, rape, assault Rohingya & fire at Rohingya villages with heavy weapons in Arakan.

So, are there no true people in the world who may protest the killing & stop genocide against Rohingya? Where is the international community? Where the human rights & humanity today? These Buddhists are not acting like human beings but like ferocious animals against Rohingya.