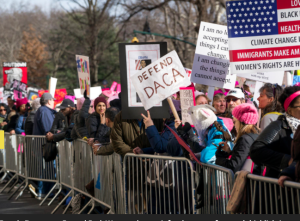 Hundreds of thousands of women are marching across the US. There are no reports yet from marches planned on every other continent. The US organizers attempted to give the marches an electoral focus but reportedly placards demanding immigration rights are one of the most prevalent demands. Immigration rights are of course a women’s rights issue, not just because it involves women & children but because feminism is a humanitarian ideology.

(PS: anyone who continues with the “pussy parade” denigrations only shows their hopeless misogyny. Kick their ass to the curb.)