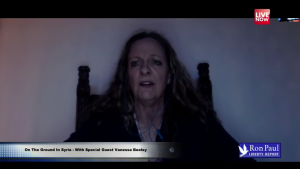 Women propagandists have come into their own in service to the Assad dictatorship. It’s a necessary role if one is to sell Islamophobia & the need to save Muslim women by bombing their children, spouses, mosques, schools, fields, cities, hospitals to smithereens. Who better to claim the suffering of children is staged by kidnapped children forced to foam at the mouth on cue, as Vanessa Beeley did in this interview with rightwing libertarian Ron Paul? It’s just a wonder that so many who call themselves progressive never noticed the rightwing politics of all these women or their associations with organized fascism. It’s just a shame so many cannot tell real suffering from false or real revolutions from street theater. But that’s nihilism for you. It’s just a pity that so many women who once played positive antiwar roles are now marching like lemmings behind propagandists. We once thought better of them.

(Photo is screenshot of Beeley on Ron Paul interview show)