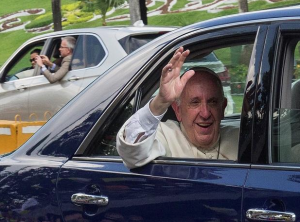 Television news is so obsessed with Trump’s tweets that none of the networks have considered war, occupation, or the Rohingya genocide of any interest for months. But the arrival of Pope Francis in Burma this morning actually prompted some coverage–although the summit of European & Asian diplomats in Burma last week received none. All media reports focus on whether Pope Francis will play politic with genocide by avoiding the proper name Rohingya as Burmese Cardinal Charles Bo requested since Bo is a nationalist supporter of the genocide.

There’s no way in hell Pope Francis can visit Burma & go all euphemistic about the Rohingya people. Suu Kyi & the generals justify the denial of citizenship, human, & democratic rights to the Rohingya precisely by claiming they are Bengali immigrants living illegally in Burma & have made it an international issue by asking diplomats not to use the proper name Rohingya. Kofi Annan obliged genocide in his commission recommendations by refusing to use the name & personally advised Pope Francis to also become a sniveling accomplice to genocide. If the pope does not stand up to the political pressure, he won’t just compromise his own spiritual leadership & reduce the Vatican to a flunkey of fascism. Most importantly, he endangers the Rohingya people & justifies governments who deny genocide & refuse to impose economic & military sanctions on Burma. Genocide is what is at stake in his visit & Pope Francis knows that–which is what makes his state visit so inadvisable & possibly compromised with the fascist junta.

Pope Francis has a chance here to show political & spiritual leadership. For the Rohingya people, we sincerely hope he has the integrity & courage to do so.

(Photo of pope arriving in Burma from Business Standard)