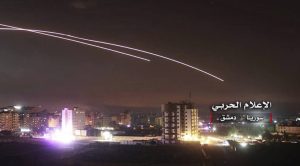 If you’re not a military strategist or what Assad propagandists call a geopolitical analyst, there are no glib explanations for why Iran launched rockets from Syria at the Golan Heights which is illegally occupied by Israel or why Israel retaliated with risky bombing sorties over military targets in Syria. With so many military forces operating in Syria, all with conflicting military & political goals–except for destroying the Syrian Arab Spring uprising–it’s a risky business they’re all engaged in. The possibility of Armageddon comes to mind. It does appear Israel is taking an independent course from the US-coalition because of how it sees the threat from Iran. This is a complicated, contradictory scenario & sustained study & analysis is required, not off the cuff vituperations.

We don’t have to understand what the hell is going on in the mind of the Iranian regime or of Netanyahu, who is presently in Russia collaborating with Putin. As principled antiwar people, our response is to denounce & oppose Iranian & Israeli bombing & to demand the immediate, unconditional withdrawal of all foreign military forces from Syria.