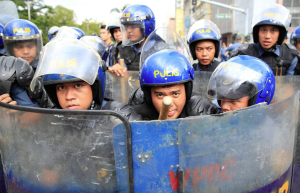 Now here’s a curious thing: riot police are positioning themselves against an antiwar protest near the US embassy in Manila demanding the withdrawal of US troops from the Philippines & “in support of President Duterte’s foreign policy.”

Actually, Duterte’s foreign policy toward the US hasn’t altered an iota except in grandstanding & blowing hot air at the US Pentagon. Some people just don’t know how capitalism operates. It doesn’t leave its immense resources in the hands of loudmouthed psychotic thugs; it just uses them for its own purposes.

If in any way, Duterte threatens the multi-billion dollar economic, political, & military associations between the US & the Philippines, he’ll be out on his ass–& Filipino oligarchs won’t need US special forces or CIA operatives to accomplish that. The presence of riot police against an antiwar protest represents the views of Filipino capitalists–& Duterte, for that matter.

Duterte is not being demonized, as simple-minded Assad supporters claim about him & Putin. He’s a monster who shoots down poor people in the streets. Their dismissal of his human rights crimes tells you everything you need to know about their deranged perspectives.

US our of the Philippines. Down with Duterte!