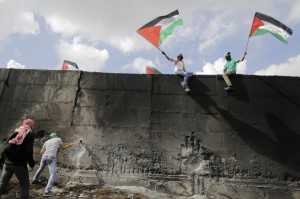 Many ask why the US invests so much in Israel; others ask the same about India in Kashmir–as if Palestine & Kashmir were just a piece of real estate. We may live in the postcolonial era but colonialism is by no means decisively defeated. Its legacy remains profound & destructive. The colonial powers made sure of that. Under neoliberalism, the barbaric phase of capitalism, attempts are underway to restore outright international relations of dominance & catastrophe where racism is the prevailing ideology.

To maintain economic & political hegemony & prevent democracy in the Middle East, the US & European powers use many strategies: they arm & fortify military juntas, medieval monarchies, autocratic regimes (Yemen, Egypt, Syria, Bahrain, Saudi Arabia, Jordan), create & arm military fortresses like Israel, & bomb to smithereens what they think cannot be controlled (Libya). They even create monstrosities like ISIS to create chaos & justify military intervention. The Middle East is all of a piece in US policy.

At no time has Israel ever been a project for liberating Jews from pogroms & persecution. The US turned away boatloads of Jewish refugees fleeing Nazi Germany & there is considerable evidence Zionist organizations collaborated in that. Israel isn’t freedom for Jews nor is it simply real estate. It’s a lynchpin of US policy which is turning the Middle East into a killing field.

These Palestinian protesters at Abu Dis in the West Bank hold up the flag of defiance while one young man tries to hammer a hole in the apartheid wall–with heavily-armed Israeli soldiers all around.

Palestinians cannot be for us merely a symbol of intransigent struggle. They are human beings with just demands, not icons–& they are human beings on the front line of struggle against the monstrous depredations of modern colonialism & military terrorism. We cannot allow them to stand unarmed & alone while Israel–armed by the US, alibied by the UN, & justified by media lies–escalates the pogrom against them. Because in every way they are fighting for all of suffering humanity. We are truly all Palestinians. A victory by Palestinians against Israeli apartheid & US military might would open the floodgates of democracy throughout the Middle East & the entire world.

We must continue public protests in their defense demanding Israel end the pogrom & end the occupation. And we must continue to build the hell out of the BDS, the economic, cultural, & academic boycott of Israel which has been so effective for a decade.